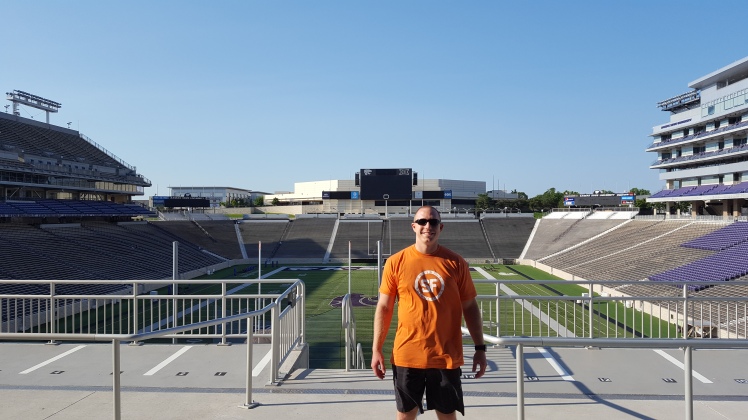 Getting into Manhattan, Kansas, I had some time to try and lock up future meetings. I stopped in the Little Apple Brewing Company and through some chats was able to get some time with the General Manager who gave me contact information for the owner. Thanks to smartphones, I shot him an email in the parking lot before going to my next place. I went to Tallgrass Brewing and tried a similar approach and a manager said she would take my information and share it. This was a small bummer as I haven’t had luck with this approach in the past. They did let me have some free tastes of beers which was nice.

I cruised over to my place to crash for the night. I had met them once before in Hawaii when they visited my bud/coworker at the time. I had him set up the communication and the Kansas friends were quite welcoming. They offered that I could do laundry, which as I’ve heard, it is good to capitalize on, and so I did. They also had a spare tent from years past that they gave to me. This now gives me more opportunities for sleeping down the road. I’m far from knowledgeable about camping, but luckily, I have friends to give some guidance. Before heading to bed, we chatted and my friend said he could give me a tour where he works. That may not sound exciting at first, but knowing that he works in the Kansas State Athletics Department it is far more exciting.

In the A.M., I was offered some strawberries and cereal which was appreciated. In the past, I would think about food and know I need to change it up to get various nutrients and so forth. My willingness and eagerness to do so are much higher on this trip and it has really helped my approach to eating food. Not that strawberries take any convincing, but just the idea.

We cruised over to the athletic department and I said any or multiple: wow, neat, cool, whoa, nice, as we walked around. I tried to be good on taking pictures and shared them on Instagram @liftnbrews so people could check it out. It was enjoyable, seeing the stadiums, facilities and the nuances of the framed jerseys, quotes, trophies, and more.

I then headed over to The Foundation to see if I could get a gym owner meeting in prior to my afternoon brewery meeting. It looked like a cool place and upon entering, it certainly was. It is geared for people who are serious about fitness. They buy high-quality equipment from the best supplier they can find, even when it costs more. They also allow 24-hour access. I was able to get a tour and some background information prior to talking with Matt who emphasized living the life. He is a body builder and by living the life he connects with his members and has a great feel on the pulse of the gym. Before I departed, they offered up a shirt to represent their gym, which I was stoked to wear, and they said I could come back in the afternoon for a workout and shower. I did come back later and pumped some iron. It felt good and I was sore a couple days from it.

The meeting with the brewery was next up. I walked in and the host remembered me from the prior day and got the owner. I met with Russ in the back and talked through the questions and heard how after 45 years in the restaurant business, he still enjoys coming to work each day. He has always placed an emphasis on treating his staff well and truly being a part of the community. This involves a beer mug club, and other clubs for loyal, and respected patrons. Of note was that Russ was not afraid of change, rather he sought it out. Being in business for 20 years, a place can become complacent which is terrible. Times change and as such there needs to be adjustments as well. At the end of the meeting for the video, one of the notable patrons was at the bar and he was quite pleasant to chat with.

I then headed back out to try another gym. They were busy but said the next morning they could meet. I would be driving to Topeka, about 50 minutes away for the night. I decided it was better to lock it in rather than risk finding something new. After doing so I headed up to Topeka.

My place to stay in Topeka was with a friend of a friend, but he loves sports and so we got along just fine. We went to a couple local spots which was nice and I tried something that was basically a fried ball of potato shavings with meat and cheese. It was pretty good, and it was nice of my friend to share.

The next day I had my gym meeting and I was determined to get a brewery meeting so I could move onto Iowa before Minnesota.