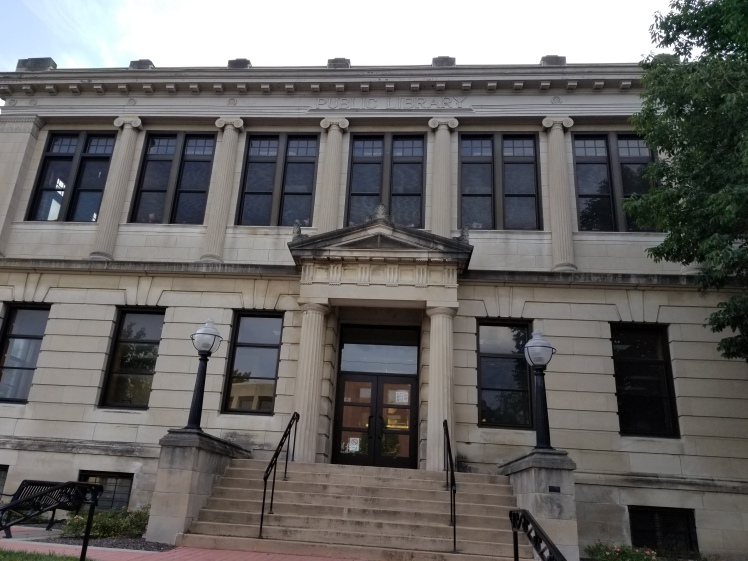 Leaving Missouri, it was time for Indiana. During the starting days of my trip, I made a post to a Facebook group that has a lot of CrossFit coaches in it. CrossFit West Lafayette reached out and said they would meet with me. This was nice knowing I had some interest in a state. Along the way, one of the coaches had messaged me about some entrepreneurship ideas he had and we had a good phone conversation, bouncing ideas off each other.

It was about a 6-hour drive ahead. A benefit with the new car is that I’m able to play music and podcasts through my car stereo. My other car could make phone calls but that was it. Additional aftermarket products didn’t work well either. Making the drive enjoyable was listening to some podcasts such as NPR Marketplace’s corner office podcast, some books through the app blinkist -which is great for reviews, but not at the same benefit of reading the full book. I’d also get some tunes going as well.

Along the way, I needed some detours to libraries for various paperwork tasks. Some of them included making sure my car insurance was in order for the new car, making sure my health insurance was good to go as I’m in between jobs, and of course the continuous process of getting the stuff for the Volkswagen buyback.

The drive was taking a long time and the detours didn’t help of course. As it was turning out I was rolling into town at 8 pm, unsure of what to do for sleep. Also on my mind was some anxiety of sorts about my lack of working out recently. I really hadn’t had a good workout in days. Adding to it was the fact that my last real workout had kicked the crap out of me.

I rationalized if I got a hotel I’d have the ability to work out that night, shower and sleep well. Then I could work out again in the morning prior to showering, eating a full breakfast and starting my first scheduled meeting.

It was getting late as I mentioned and then I noticed on my phone that rather than it being 8 pm, it was now 9 pm! I didn’t realize Indiana was in the eastern time zone. I could’ve used that hour. (It’s like the movies, when the character says the name of the movie, during the movie!). I got a hotel, which has an extra bonus of a Starbucks gift card, meaning another day I could get work done with the comped coffee.

That night I got after it. It was a solid workout, grinding along. The “fitness center” wasn’t much but I was able to get some running in, then a little circuit with running, dips, lat pulldowns, sit-ups, and burpees. Not only did I physically feel better, but mentally as well. I was much more relaxed and had a far better mood.

I then showered up, did some typing and called it a good night.